There’s not much new to see on your end – a lot of the enhancements are on the back-end of the blog (administrative sections). But I did add the ESV Daily Passage SnapOn (you can see it in the sidebar). Aside from that, this version allows the blog administrators to create new themes on the fly, so I think I’ll create one pretty soon here, just for the hoo-hah of it. 😉

If you’re interested in testing this blog software out, you can download it and install it yourself (just go to my Sourceforge Project page. I also have space for another blog or two here at outofthebloo – so if you’d like to alpha test let me know (leave me a message in the comments).

We were down all day (and so were several of the alpha testing Bloo blogs) due to a serious Denial of Service attack on our webhost.

If you haven’t blogrolled GospelDrivenLife yet, what are you waiting for?

I think I could learn a lot from this guy. This post is absolutely beautiful.

What I saw in Bob was evangelism by actions as well as words. He treated these men, with their calloused hands, lice filled hair, and beer-stinking clothes with dignity and respect. They had names. They even had families. They had senses of humor. I watched them respond to Bob and learned to do the same. Bob went to be with Jesus last year but I owe him a great debt.

Finally, I began to meet international students at Portland State University. There were dozens of them, mostly from West Africa and the Middle East. They were very open to talk about religion too. What an education — to learn to explain the Gospel to people from a different culture and to learn from them as well.

I was beginning to see the Holy Spirit tear down my prejudice and pride toward unbelievers. I was beginning to like these people –to enjoy their quirks, to tease them, to learn from them. They were people who responded well when they were loved sincerely and loyally and treated with respect. I was also seeing that the word “lost” was more than theological. There were indications of being alienated from God in their lives — in their experience of themselves. It was darkness.

My experience in learning to seek the lost would become a powerful shaping instrument in my life.

I’m on lunchbreak at work.

I just discovered Web Sudoku, inspired by the obsession of my sudoku-addicted wife.

In Philippians 2 Paul recites what many believe are the words to an ancient Christian hymn, the Carmen Christi

Though I may write more about this later, I think for now I’ll just let this hymn speak for itself:

Have this mind among yourselves, which is yours in Christ Jesus,

who, though he was in the form of God,

did not count equality with God

a thing to be grasped,

but made himself nothing, taking the form of a servant,

being born in the likeness of men.

And being found in human form,

to the point of death,

even death on a cross.

Therefore God has highly exalted him

and bestowed on him

the name that is above every name,

so that at the name of Jesus

every knee should bow,

and under the earth,

and every tongue confess that Jesus Christ is Lord,

to the glory of God

Tyson, a former member (1998-2000) of the student worship band I used to lead, is getting married tomorrow to Erin.

I love these band weddings! This will be the 7th former band member to get married this year in six weddings; one of the weddings was for a couple (Matt and Stephanie) who were both in the worship band.

Tyson and Erin will be moving to Seattle (where Tyson lives now). Tyson currently is on the ministry team of this church plant.

It’s so neat to see these kiddos grow up!

I highly recommend to you a blog I just discovered; Mark lauterbach’s GospelDrivenLife.

In his latest post, Hypocrisy and the Gospel, Mark delivers some piercing insights. Some of which strike a little too close to home for me . . . Read the whole thing. The conclusion and exhortation of the post is here:

To build your faith — the people who surround you in your local church — your friends and pastors — are the most likely means of grace for your sanctification. Being known by a few for the real temptations you face and the sins you commit — and looking them in the eye day after day — is a powerful grace to you because it means you are killing your hypocrisy and seeking only the favor and grace of God in the Gospel. God resists the proud and gives grace to the humble. You and I do not need an ‘expert” — we simply need the cross-centered care of a brother or sister whose primary qualification is that they are not us and therefore see us clearly.

At our Good Friday services this week I was blessed to meet up with some awesome students that I haven’t seen much this year, since they have been away at college. Adam has been away at Baylor and Kelsey has been at A&M.

Both of these precious people are thriving in the Lord. They were nearly beside themselves with praise and joy for what he has done this year! The reason is simple: they have avoided the trap that many college freshman fall into of isolating themselves from strong Christian community. Instead, these two have thrown themselves into community through their local churches and have been growing and ministering all year. In talking about this with these two humble students they made the observation that getting connected with a local body is really what’s made the difference.

It was awesome talking to them. Sometimes working with students can get discouraging, but times like this blow all that discouragement away.

If any student (or anyone, really) reading this feels like God is far away; if you find yourself asking “Where is God?”, I encourage you to look to the Bible. It tells us where he is.

Find a community of believers and get connected. It won’t be perfect, and it might not meet all your expectations. But if the Lord Jesus is honored there, and if his truth is proclaimed, that’s where you need to be.

There’s a little ash tree in our backyard that I planted a few years ago. Every year it seems to be a late bloomer. Of course, in Houston anything that hasn’t leafed out by the end of March is a late-bloomer.

As of last week, the tree was still bare of leaves. I was convinced that it had died. It certainly looked dead, and it showed no signs of life; no greening, no budding, nothing.

Yesterday Jill mentioned to me that she had seen a leaf on the tree. Incredulous, I went to take a look and found that the little tree is indeed alive, and will burst forth with leaves soon! Just since yesterday several more have sprouted. 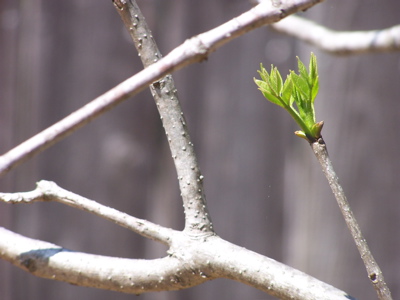 This reminded me of something: there are people I know who are far away from God right now, or who are drifting away. Some have been on my heart and prayers a lot recently, because they were once so full of life, and now they appear dead. It’s hard to see that. It hurts.

But appearances can be deceiving, and not every dry, brittle tree devoid of leaves is dead. Some of them have life, ready to burst, just underneath the surface.

And even if dead, they can be raised. Jesus can do anything!

And he who was seated on the throne said, “Behold, I am making all things new.” – Revelation 21:5a (ESV)