Are you currently "estranged" from church? Are you mad at people or situations at your old church, and has this been keeping you in bed on Sunday morning?

Perhaps you'd like to go back, but you're worried about what people will say. Awhile ago, the Rejected Disciple was feeling the same way, but he thought he'd give his old church one more try.

Here are some excerpts describing what he found:

This morning (Sunday) I just had to go to church. Had to. Keep in mind I haven't been to church in a very, very long time. I had the excuse that I worked on Sundays (even though it was later in the afternoon and I could have gone, but see, I have a "routine" I have to follow on workdays, and, well, you know…) but now I have Sundays off. My schedule has been like that for almost a couple of months, but I still didn't go. But today, I had to. Not because of any crisis, at least none that are obvious to me or anyone else, but I'm a part of the body of Christ, and maybe I was feeling the disconnect and the fact that it just wasn't right. It just wasn't the way things should be.

Not only did I have to go to church today, I had to go to MY church. I had to go to the church where I have my membership, Yale Avenue Christian Church. Never mind that things happened there that have, shall I say, disappointed me. Never mind that I've moved theologically to the left of where Yale Avenue is (since it has the rep as being the most conservative DIsciples of Christ church in the city of Tulsa.) Never mind that I was really apprehensive about going, and thinking about attending somewhere else and possibly transferring my membership. That was where I needed to be today.

I fully expected to make a appearance, decide that this church wasn't for me anymore, and to start making plans for finding another church. I didn't expect to feel like I was back home. I didn't expect to feel that Yale Avenue was still the place for me. But, damn it, I did. Now, I could over-analyze the whole experience, chalk it up to an emotional reaction, realize that my welcome after having been gone so long was more extravagent than it will be after I've been there for a month or two. But I know how I felt when I was there. I was home.

The people of the congregation welcomed me with open arms; with hugs, handshakes, and smiles. It's almost like I never left. Well, scratch that, it is like I left and came back, which is what I did. Again, they might not be as excited after seeing me Sunday after Sunday. But now some might even be stirred to pray for me once they've seen me. I especially enjoyed talking to people who were in the praise band when I was leading it and were still in it, like the kid who plays bass, who began when he was about 15 or so and now is in his first year of college. I was happy to hear that he leads the youth praise band now. Or the young married woman who just had her first child. And, of course, there were others, both in the praise band and without. They remember me.

Now I know why I had to go. I'm still not 100% sure I will keep going there. But there's a much better chance now that I did go back and was surprised to find that I was part of a family that I hadn't seen for months and months. It was easy while I was away to think that I never wanted to go back there. Now God threw a wrench into the works and it has started me thinking. Thinking that maybe my church home is the best place to be for now.

I hope that you have a place in a church that feels like home. The Bride, though imperfect and, sometimes, maddening, is still very beautiful.

And let us consider how to stir up one another to love and good works, not neglecting to meet together, as is the habit of some, but encouraging one another, and all the more as you see the Day drawing near.

I'm in the Christmas spirit a little early this year, so I've switched to the Christmas Star theme here on Out of the Bloo. This theme will be up for the remainder of the holiday season.

Tonight I watched the latter portions of the excellent A Charlie Brown Christmas. Would a cartoon like this be produced today? I don't think so. The overt and sweet spirituality of the show is a breath of fresh air.

I particularly love the decoration by the children of Charlie's scraggly little tree. What a fabulous picture of God's redemption!

Speaking of trees, we already have our tree setup, which has got to be a record here at the Roberts' household. We got our tree on Saturday from a local tree farm, which is a neat family tradition that we began years ago. Except for last year, which reminds me of another picture of redemption, communicated to me through another scraggly tree.

For to us a child is born,
to us a son is given;
and the government shall be upon his shoulder,
and his name shall be called
Wonderful Counselor, Mighty God,
Everlasting Father, Prince of Peace.

Of the increase of his government and of peace
there will be no end,
on the throne of David and over his kingdom,
to establish it and to uphold it
with justice and with righteousness
from this time forth and forevermore.
The zeal of the Lord of hosts will do this. I have a blog!

There's a good reason why I haven't posted in a week.

And I'll let you know as soon as I think of it.

Here's a picture of a monkey [hat tip, my post on Thinklings **] 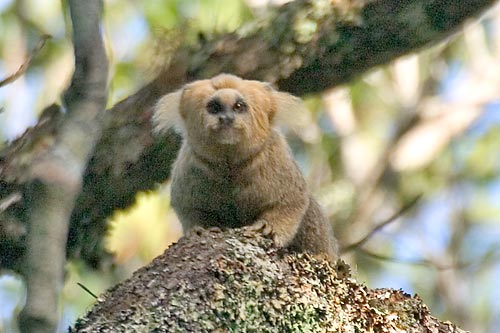 (this is a Buffy-headed Marmoset)

** and how pathetic is it that I'm cross-posting this?

I saw this on the excellent Brandywine Books. It's from The Collected Letters of C.S. Lewis, in which Lewis writes to his brother Warren on July 20, 1940:

Before the service was over – one cd. wish these things came more seasonably – I was struck by an idea for a book wh. I think might be both useful and entertaining. It wd. be called As one Devil to Another and would consist of letters from an elderly retired devil to a young devil who has just started work on his first ˜patient'….

I also think it's cool that he got this inspiration in church.

Ok, that's not that great of a title, is it? Everyone seems to have a cool title for their link posts, except me. Oh well.

Some linkage for your enjoyment while the post-droubt here on Out of the Bloo continues:

Jared offers some welcome news regarding the divorce rate in Christian marriages.

Lars Walker shares some of my pessimism about the state of things these days, but ends on a good (and true) note:

And that reminded me that the Kingdom of God is bigger than my fears. God is at work today, and what He’s planning to do is probably something that hasn’t occurred to me. His instruments will come from places where I’m not looking.

Tim Challies provides photographic evidence of his recent meeting with the one and only Adrian Warnock, who is a capital fellow by all accounts.

Jared, again, gives his take on the Emerging Literati.

The Fire Ant Gazette posits a succinct review of the movie containing the longest scenes known to man of characters staring at each other, Meet Joe Black.

The beta version of Bloo is about to be released. I was originally just going to do some tweaks, but ended up adding quite a few new features and really concentrating on spam protection (since many of the Bloo alpha testers are being overrun by trackback spam now. Spammers are evil).

I have added some layers of protection here – including a new SnapOn spam filter that I'm trying out tonight. It's already nabbed some trackbacks (trackback spammers are the evil gnats on the backsides of the evil comment spammers.)

I hope to get back to regular posting too. This has just sort of consumed me.

Bloo is shaping up into a decent little blog software (if I do say so myself). Miles to go still, but the functionality is expanding.

I'll leave you with a great quote from Jared at BCC Is Broken: