I’m writing to you from Simferopol, Ukraine, where we are visiting Jill’s parents, Loys and Virgil, who are missionaries here reaching out to the Crimean Tatar people.

I must say, Ukraine is amazing. We left home on Christmas afternoon and arrived here on December 26th, with only a few mishaps (for instance, a lost bag – perhaps I’ll write of that adventure later). When traveling to the former Soviet Union, one of the first things you realize is how blessed we are in the United States. There are many people here who are living in poverty, day to day. The Ukrainians we have met have all been great people, and I could listen to them speak their beautiful language all day long. The kids and I have been having fun trying to learn the Cyrillic alphabet and some basic Russian words.

There are two main groups of Ukrainians here in Simferopol. The first group is native Russians. They are generally fair-skinned with brown or blond hair. The other group is the Crimean Tatars, who generally have darker hair, dark eyes, and more of a Mediterranean tint to their skin. The Russians tend to be Eastern Orthodox, and the Crimean Tatars are almost all Muslims, although both groups seem to be relatively nominal in their faiths. To the Tatars, being Muslim is part of what makes them Tatars, so it is rare to find a Christian Tatar. They are a beautiful people – Ukrainian women are renowned for their beauty.

Yesterday, our first full day here, we went to the University to sit in on the English book club that Jill’s parents run. We spent our time in three different sessions answering questions about the United States and asking questions of our own. The students involved in the book club are all learning English, so we got to converse in our own language. They were wonderful to us, and were especially interested in our Christmas traditions, how weddings happen, what music we like, US politics and what we think of Ukrainian politics and, in a somewhat random moment of the question-and-answer, vegetarians! 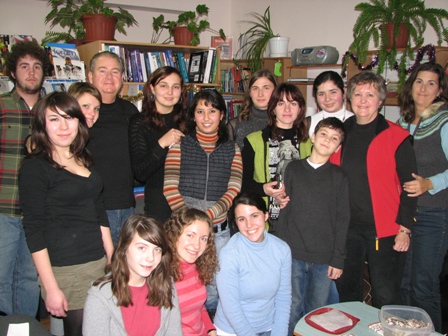 Some of the book club students. Our translator, Nata, can be seen sitting between my girls on the front row.

The University itself was once a military school, and still is adjacent to a Ukrainian military installation complete with lines of tanks. The school is in a condition that would generally not be tolerated in the US, but on the first floor there is a fantastic marble (or marble-appearing) floor with flowing Cyrillic script etched in it, and sculptures of famous people inset in the columns. I’m told the students designed it. One hall was also festooned with artwork from the students. I am no artist, but I will say that this artwork depicted realistic subjects (people, primarily) drawn with great skill, and I’ve decided already that if this is Russian art I like it a lot better than most of the art in the US, which seems to all be of the abstract variety.

Outside of the University is a monument which commemorates May 18, 1944, which is, as the students solemnly told us, a “very black day” in Crimean Tatar history. I will write more about what happened on that day in a later post. 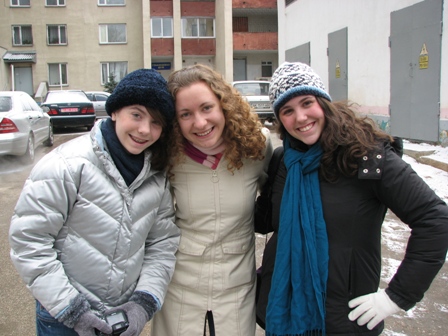 The girls and Nata

Last night we went to a “youth group” meeting at Nata’s church. Nata is Loys and Virgil’s translator and is absolutely precious. She is an amazing servant and has been with us much of the time here. Here, “youth” encompasses college students as well, and most of the dozen or so students attending were from the University. We had a wonderful time. They taught us a Russian praise song, and we in turn showed them a song from our children’s services – Molly and Bethany led them in the singing and Andrew played guitar for them. They loved it! After that, we talked about “presents”, and the leader, Roma, talked about the presents we can give Jesus. As Nata directed us by translating, each of us wrote down a present we can give Jesus, and also a prayer request, and placed it in a gift box. Roma ended by praying a very earnest prayer in Russian. While we didn’t understand a word of it, it was beautiful to hear.

After this, we played a couple of games. The first saw us divided into limons, Banans, and Yablockas, or Lemons, Bananas, and Apples. It wasn’t long before I recognized the game; it was Fruit Basket Turnover from my way-back youth group days in San Antonio. We then played another game that I won’t describe, but it was also something I recognized. 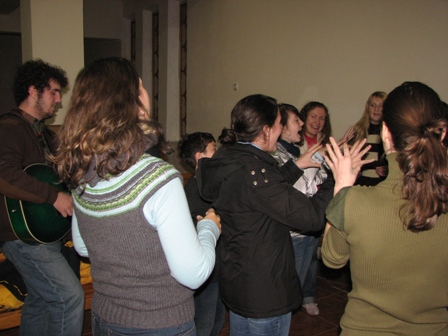 Singing with the students

A thought popped into my head at this point. This entire youth activity, from the songs we opened with to the short message to the games we ended with, would be dismissed these days as hopelessly cheesy by most student ministries in the United States.

But these beautiful young Ukrainian Christians were joyfully playing, talking, and participating. During fruit basket turnover they were laughing their heads off!

I’ll take last night over most of the student services I’ve been in – and I’ve been in a lot, having done student ministry as a volunteer for years and years, up until 2005. And this is not an indictment of what we do in the US. I understand the reasons why student ministry is done the way it is done here. But to see these beautiful friends, with not one thought to how relevant or cool they were, just having a joyful time in the Lord . . . well, it was refreshing.

Today we met with Sergey, a friend of Nata’s who had also been at the service last night, and played some Futbol! Sergey is a professional soccer player for a team in Kiev and he and his thirteen year old brother-in-law joined with Andrew, Jill, Bethany, Blake and me for a great game of field soccer – in the snow! I haven’t had that much fun in ages. Sergey, who is in his twenties, and Blake, who is ten, really went after each other – in fun, of course – and it was a great game. After the game, Sergey told Blake that he has great technique and complimented him on his left foot, and encouraged him that if he wanted to persue a professional career, he should do so. What an encouragement! Blake really did play well, and I think made himself a little sick in the process – he now has a cough. 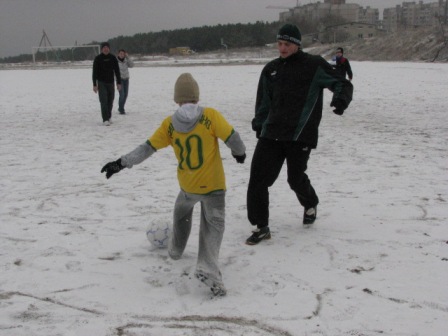 Blake and Sergey going at it 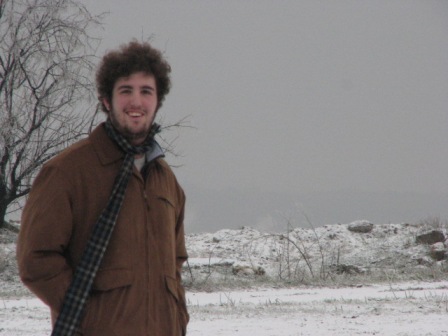 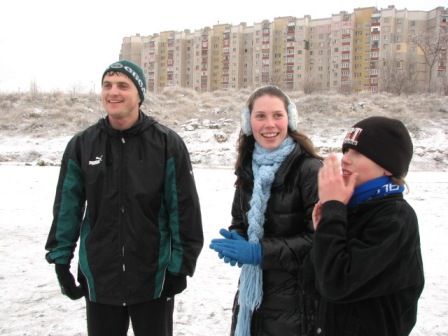 Sergey with his lovely wife and Vlodie. The apartments they live in are in the background.

After this we went ice-skating at an outdoor rink, again with Nata joining us. Only Molly, Bethany and I skated, while the others sat inside and watched. It was awesome. I haven’t skated in awhile and I’m not very good at it, but we had fun, and enjoyed the New Year’s decorations. They really celebrate New Years big here, and they even have New Year’s trees, decorated just like our Christmas trees. They have Father Frost and the Snow Maiden too; Father Frost is basically Santa Claus. For those who celebrate Christmas, it is celebrated on January 7th. 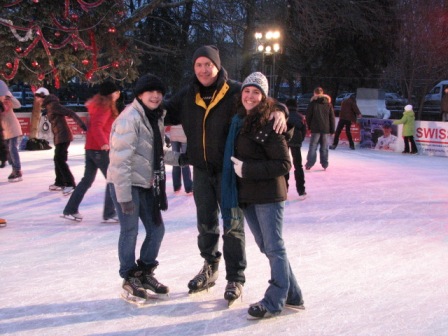 Iceskating! Notice the New Year’s tree in the background.

After skating, Andrew, Molly, Bethany and I rode the Marshutcka bus with Nata back to Loys and Virgil’s apartment. On the way, Nata told me her testimony. It was a beautiful thing to hear. She was raised Orthodox but didn’t know Christ. She was invited three years ago to a camp by Americans who had come here and she saw the Russian language version of the Jesus movie. It was because of that that she accepted Christ, though it cost her much to do so; her parents are not supportive and her father nearly disowned her. But she has the joy of Jesus in her heart and serves with such humility and grace. 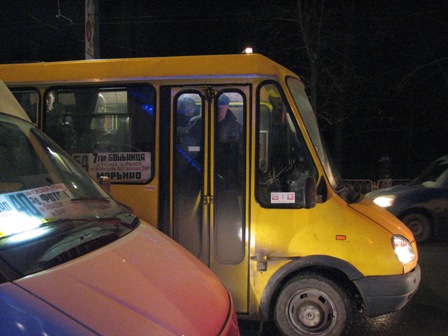 We went to eat dinner tonight with Jason, Anya and their baby daughter Lilly. Jason and Anya are friends of Loys and Virgil’s. They are believers – Jason is American while Anya is from Ukraine. After dinner, Anya told the story of her conversion and it also involved having seen the Jesus film. I’m beginning to realize what a great impact that film has had on people around the world.

We’re now settling down for another night. It’s about 11pm here, and we’re looking forward to a quick trip to Yalta tomorrow. I hope to write more as our time here continues.

I love being in Ukraine.