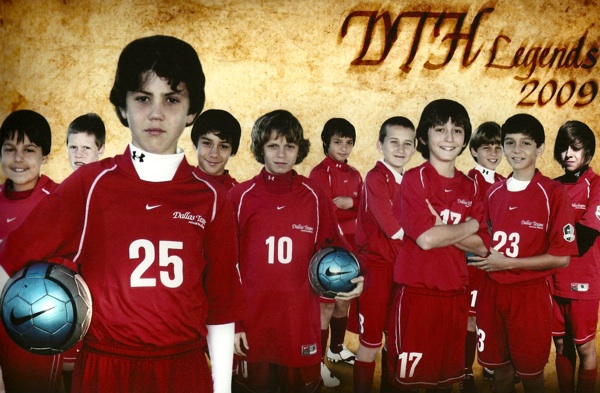 Blake is number 25, in front, giving us his best game face. The cool thing about this picture is that every kid who got a team picture got to be in the front. It’s not really a group shot; The photographer took individual pictures of each kid and photoshopped each kid in the front for the shot they purchased. Very nice.

Blake’s team played the first day of a soccer tournament today. It was fun, although it was FREEZING out at the fields. His team won the first game 2-0 against Chivas. Blake scored a goal, capitalizing on a great cross from Pablo. Unfortunately, the second game against Tigres was very tough, and they lost 3-0. Tomorrow they face the Houstonians, which is a very, very tough team.

Update: They tied the Houstonians 2 to 2, which was disappointing (especially since the Houstonians second goal was off a questionable call resulting in a PK) but the boys played their hearts out in the cold and mud. Well done!