During our time in Ukraine we had dinner one night with Jason and Anya and their sweet little baby Lilly. Jason is an American and Anya is Ukrainian; they met while she was an exchange student in the U.S. They are a wonderful Christian couple. 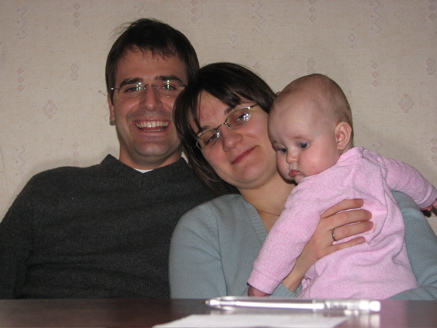 Anya speaks excellent English and I asked her where and when she had learned to speak it. She told me that her father was stationed in Germany when she was six and that she learned English at day-care while there.

I also spent time as a child in Germany; my dad was stationed there with the Civil Service for three years when I was between 9 and 12 years of age. Always interested when people mention that they too spent time over there, I asked Anya where they lived. She gave me the name of a city I had never heard of and I asked her if it was anywhere near Ramstein, where we lived. She wasn’t sure.

It was then that I realized something . . . it should have been obvious to me, but it wasn’t: The reason I didn’t recognize the place where Anya had lived is because Anya’s dad was a member of the Soviet military, and she lived as a child in East Germany. Our nations were opposed to each other in those days and our parents were on opposite sides, serving governments that had thousands of nuclear weapons pointed at each other.

I’m so thankful that our nations aren’t hostile toward each other any more, and I pray it stays that way. It’s so good to be able to go behind what was once the Iron Curtain and to have fellowship with dear brothers and sisters in Christ who live in Ukraine.

Thanks be to God!

2 thoughts on “East and West”