Day 6 of our tour was a very full day. We left our hotel and Bradfield College early in the morning to catch a plane to Barcelona, leaving merry olde England behind. England was a great experience, and one more familiar to this particular American’s sensibilities thanks to the language and more common heritage. Spain is, at this point, an unknown.

We arrived in Barcelona in the early afternoon. And what was this? The sun actually appeared, and delivered warmth. The skies were blue. The chill and overcast of Britain has been left behind. We boarded our bus and rode into Barcelona. 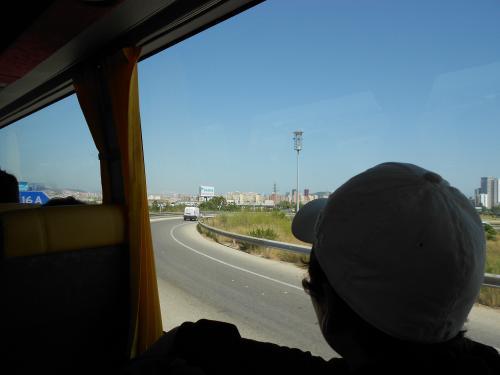 Austin led us to a restaurant downtown and we had a traditional Spanish buffet meal consisting of salad, potatoes, vegetables, breads, meats, pasta, pizza, frozen yogurt . . . basically a lot of variety and all of it good. We then rode to the Almira hotel on the north side of Barcelona. 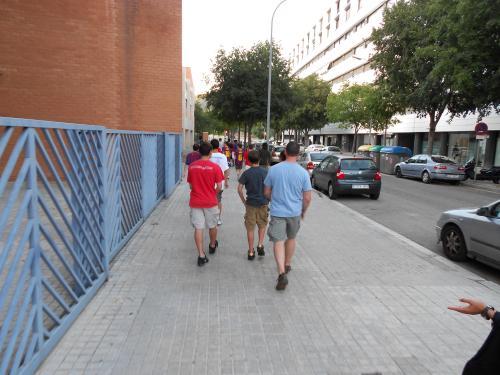 Walking to the hotel

We didn’t have much time to rest. The boys had a short training session with a Spanish coach as we parents settled in. On the menu for the evening: the Spanish Super Cup (SuperCopa) final between FC Barcelona and Real Madrid. The game was scheduled for what in the United States would seem an insanely late start- 11:00pm – but I’m finding out that that’s just prime time here in Barcelona.

The game, by the way, was a hugely anticipated match here. It’s hard to convey how devoted this city is to futbol. The members of FC Barcelona are revered here, and Real Madrid is a despised rival. It promised to be a great game (and trust me, it was – more on that later).

We took the green line subway south, and walked through the streets of Barcelona at quick pace to a Tapas bar for some pre-match food. Laid out on the table it looked a little sketchy, but I quickly discovered that it was quite good. Austin had the top floor reserved for us and we ate heartily. The food consisted of potatoes, meats, and vegetables, with soda, water and beer available to drink (for those parents that wanted it. As far as I know none of the kids snuck one, and I was quaffing Coca-Cola). 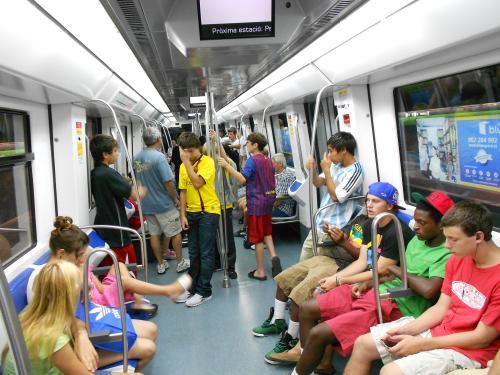 Riding the subway to the game. It got much more crowded than this the further we went 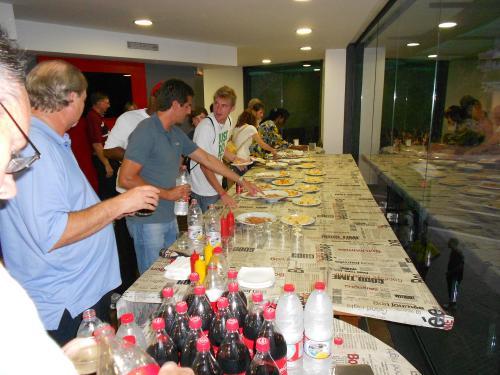 Eating at a Tapas bar

We then walked, at a very quick pace, to the stadium. It was nerve-wracking for me to think of all these boys and parents walking in a strange city, without a clear idea where we were and hoping not to lose anyone as our tour guides nearly jogged on ahead of us. But somehow we all arrived together. 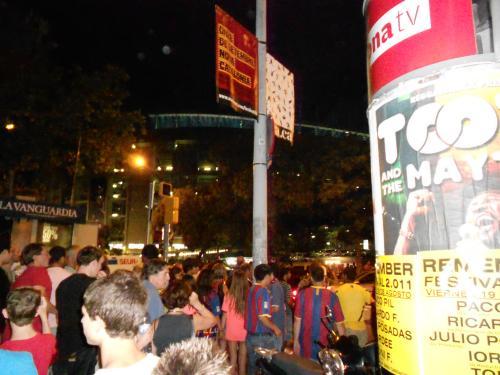 Walking to the stadium 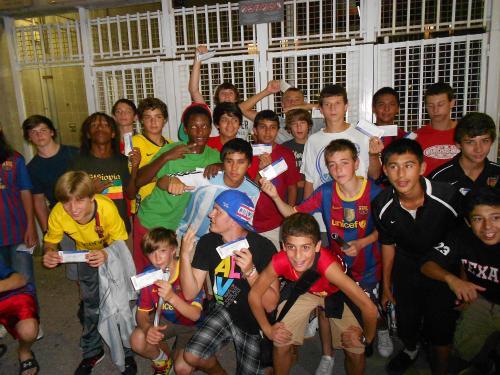 The boys with their tickets. We had good seats, about 20-25 rows up on the field level

The game was held at Barcelona’s Camp Nou stadium, which has the prestige of Yankee stadium or Madison Square Gardens in the States. We’ll get a tour of it in a few days.

It was now about 10:00pm, a full hour before kick-off, and the stadium was already nearly full. 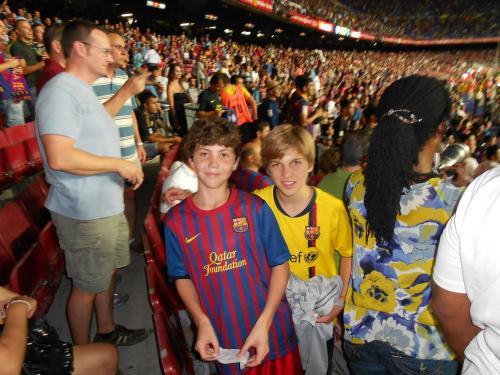 The crowd was very hyped, as you can imagine, as start-time approached. Finally, we were ready for kick off. Below are pictures I took during the game. 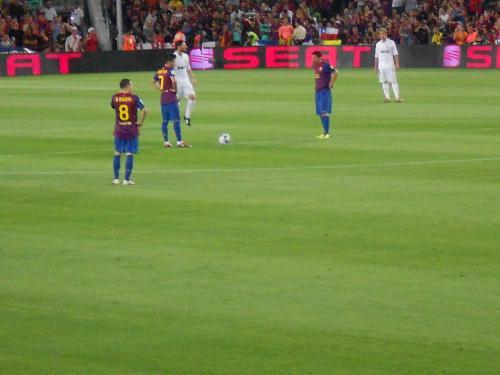 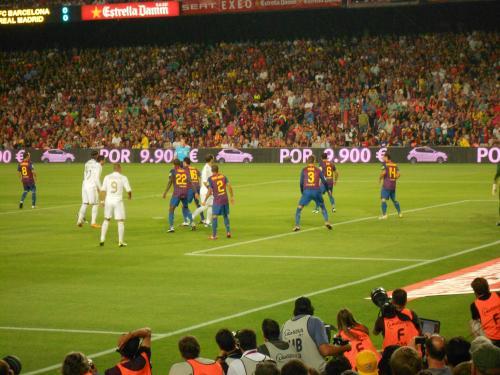 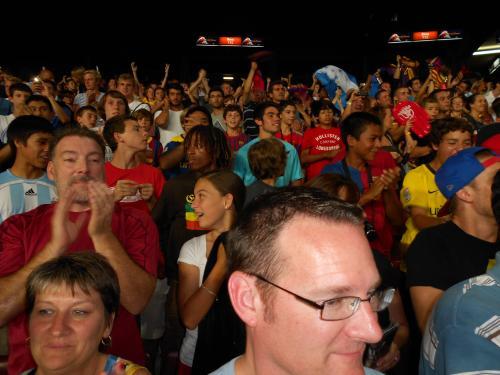 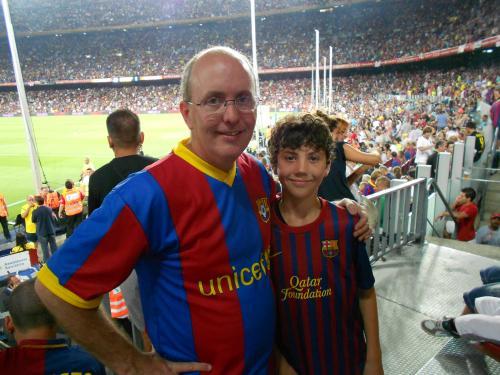 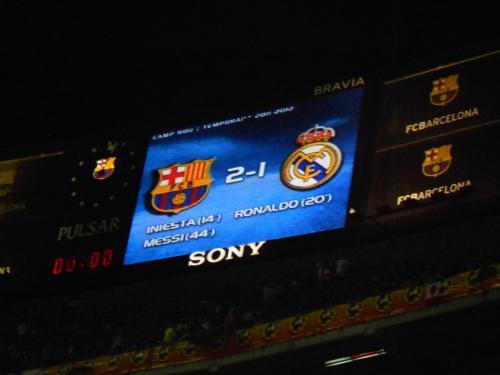 Halftime. We saw goals by both Messi and Ronaldo

Messi, the great one 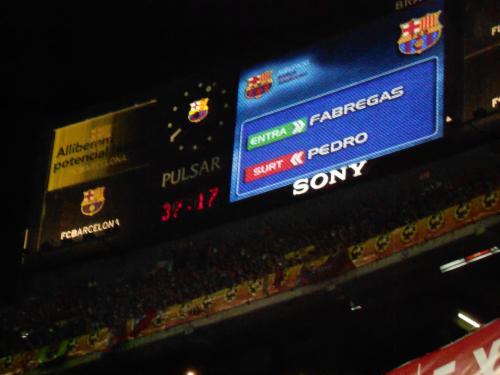 Late in the game, Fabregas subbed in. He was Arsenal’s captain up until a few days ago. He got a big ovation 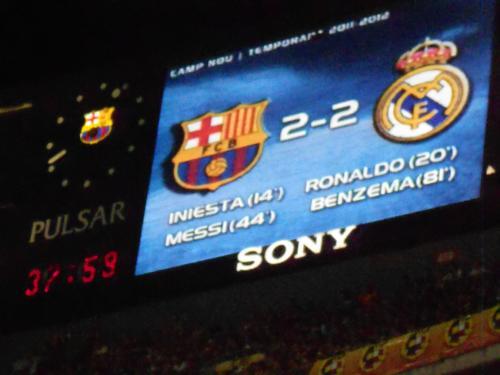 Tied! I was worried that the game would end 2-2, which meant overtime and possibly PKs. It was already very late 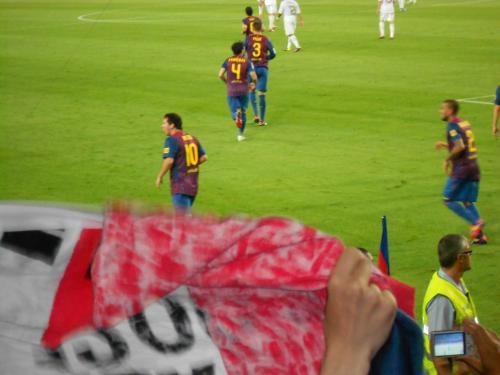 Messi scores! Here he celebrates a few seconds after 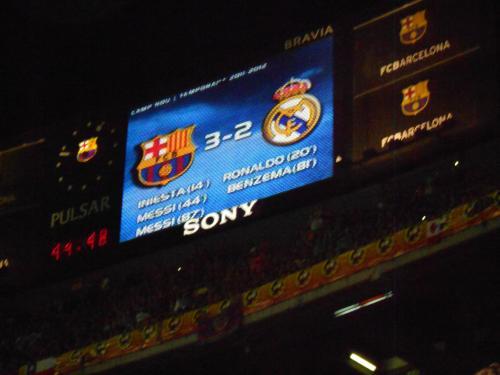 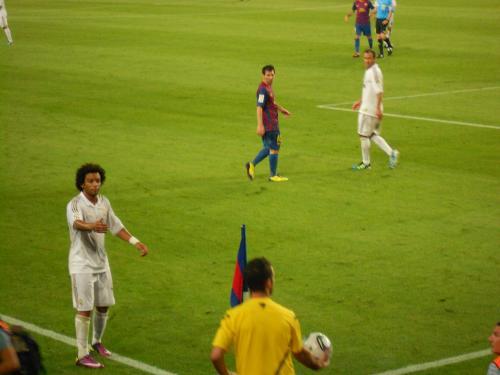 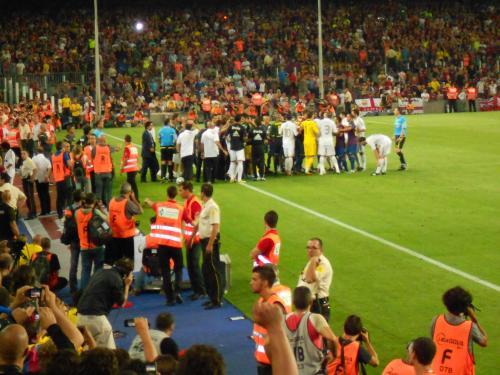 Real Madrid appeared to be trying to hurt Messi and other Barcelona players during the game. This scuffle ensued after a late, hard foul on Fabregas 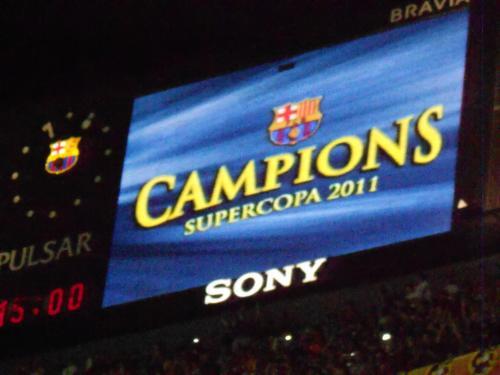 Champions! The place went wild at the end of the match 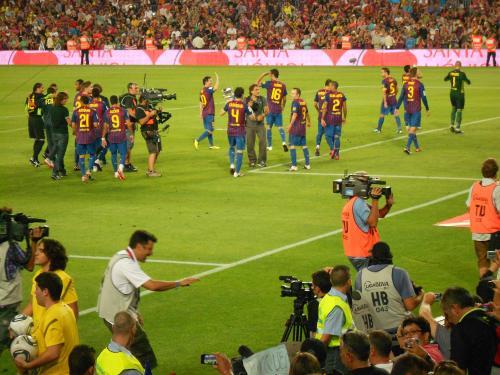 The team, celebrating. They walked the stadium, danced in the center, etc. The fans were going crazy

This was an absolutely fantastic game. Incredible. Austin told us that he’s seen “probably a thoosand live soccer matches” in his day, and this was the best one he’d ever seen. Spanish soccer is the best we’ve seen so far. I’d never seen such a display of soccer skill before.

In the wee hours of the morning we walked back (at an incredibly fast pace) to the subway. It was a complete milagro that we didn’t lose anyone. I guess I could keep track of the boys, and especially my boy, by the fact that many of them were wearing Barcelona jerseys. Oh, wait, everyone was wearing a Barcelona jersey! But, somehow, we didn’t lose any of the young guys. We finally got back to the hotel and crashed. It was such a full day, but very good. 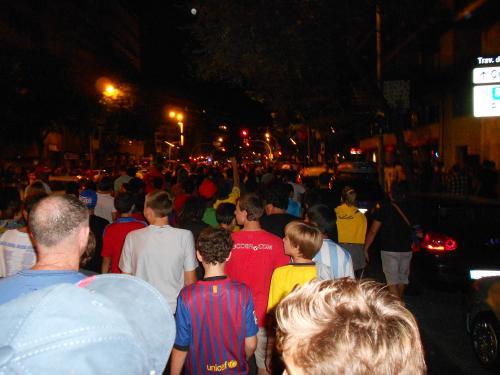 Tomorrow, bus-tour of Barcelona, and a match against a Spanish team.