Sunday dawned clear and bright, as we slept in. The services at the English-speaking church Loys and Virgil attend don’t start until 1:00pm, so this was a nice change from our normal 7:30am start to Sunday morning back home!

Jason and Anya came to pick half of us up (Virgil drove the other half) and we made it to church about ten minutes before the service started. People were very welcoming. The church is a great mix of nationalities, with a lot of Malaysian people along with some Nigerians and a few Americans. Most of them are students, so the church has a very young feel to it. 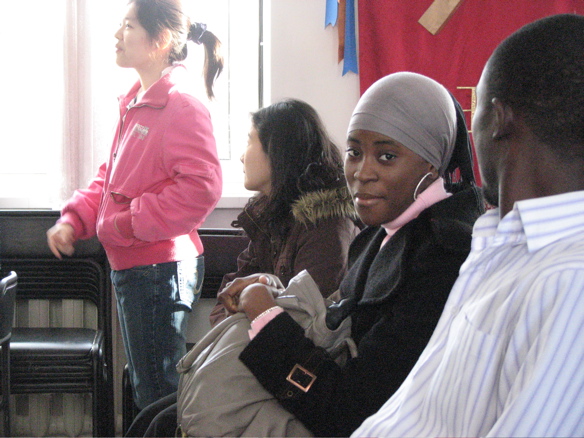 Some of the people who came to church 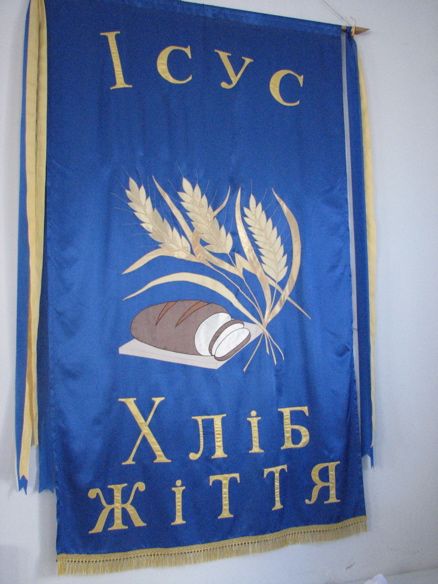 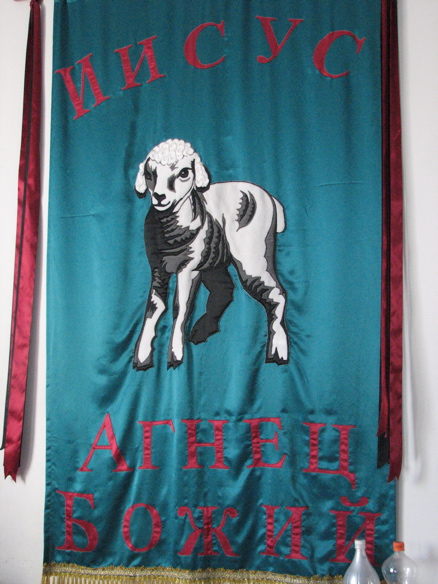 The service was . . . wonderful. The worship time was awesome, led by a praise band made up of primarily Asian students. They had a piano, bass, guitar, and some bongos, and another girl in the audience wielding the tamborine. We knew most of the songs (this was primarily contemporary worship), and sang on all of them. While the acoustics, music, powerpoint, etc would be considered a little rough by our polished American church standards, it’s been a long time since I was in a worship time as good as this one was. Everyone in the room was singing, and this congregation of perhaps 60 or 70 people rivaled in volume congregations many times larger that I’ve been in in the States. 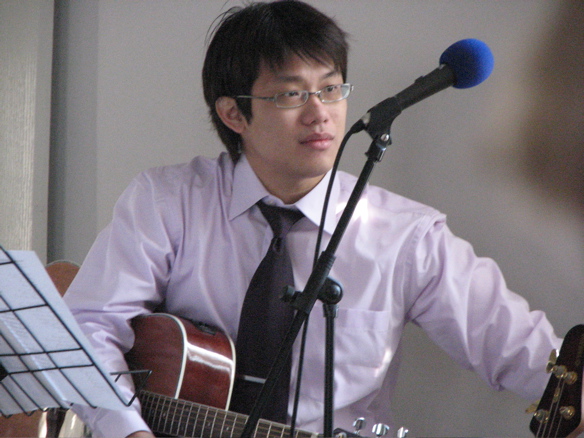 One of the worship leaders

After the singing, the pastor delivered a message based upon the book of Judges and the endless cycle of Israel’s leaving God, suffering, repenting, and coming back to God. Molly wrote down the following quote, which I thought was very good:

“Victory is not overcoming my sin,

or the devil, or the world.

True, lasting victory is only found

when Jesus overcomes me”

It was a great service. The congregants were joyful and welcoming, the worship was blessed and had full participation, the message was to the point and impacting. We finished with a chorus of Blessed Assurance and church was over. At this point many of the students who had attended went to, I presume, catch a Marshutka back to where they live. Churches here don’t need big parking lots.

As I left the church the thought occured to me that this was a taste of heaven. I was worshipping the Father with brothers and sisters of multiple nationalities; all colors of the rainbow, all in one accord. I’m so used to being in worship services with people just like me. This was wonderful.

Following church, we went next door to the house that Anya and Jason are house-sitting, and they allowed me to call home over the free Vonage phone there. That was very nice, and I had a good conversation with my parents.

Then began the adventure of finding lunch. We drove downtown and stopped in at an italian place that had delicious smells wafting from it. We were in there for close to ten minutes before we realized they had just closed for the day (heh – they closed when a group of clueless Amerikanskis stopped in – coincidence? 🙂 We then walked back out into the square and travelled through a tunnel – complete with beer bottles and some vomit from the night before – and found ourselves in a Celtic restaurant, with kilt-wearing waiters. We made our way to some tables upstairs, but the menu was multi-page and poor Anya was hard-pressed to translate it for all of us so that we could decide what to get. At this point Loys suggested a place she knew of that had English menus. So we exited the Celtic place and began making our way to this third restaurant.

On the way, we came upon Father Frost and the Snow-maiden. Father Frost was announcing Happy New Year (“Snovim Godom!”) to the crowds to the beat of techno music. We stopped for a second to watch and it was at this point that I caught the eye of a Babushka who came over and began talking with me in, I presume, slightly tipsy Russian. I smiled and said “Ya Amerikanyetz”, to let her know I don’t speak Russian. At that, and with a big grin, she began dancing with me. We cut a rug for awhile right there on the square – now and then I would try to pull away as I repeated “Ya Amerikanyetz”, but that only increased her persistence in dancing with me. She was teaching me some form of a Russian polka, and had me in an iron grip, when Jill finally ran up and helped pry me away, and we made our escape! 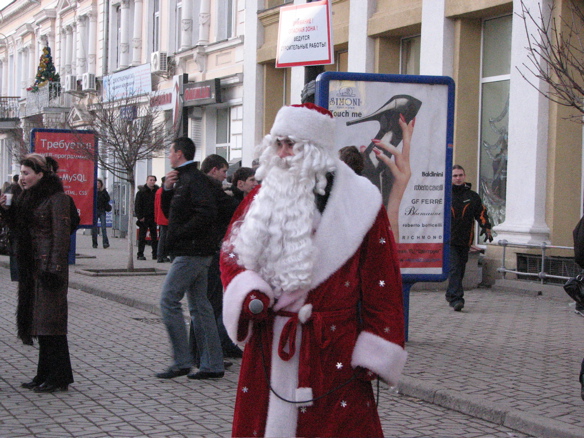 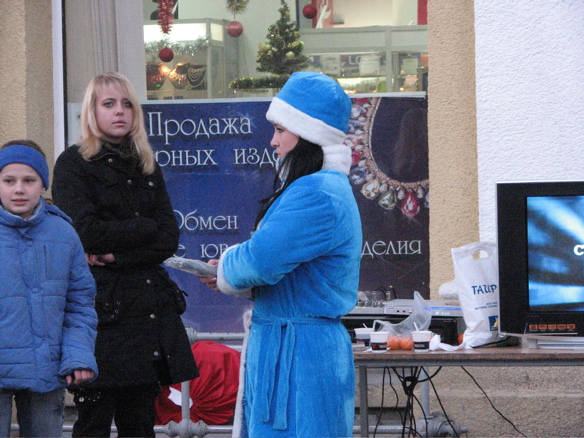 The Snow Maiden. Andrew’s convinced we need to incorporate Snow Maidens into our own Christmas traditions in the U.S. 🙂 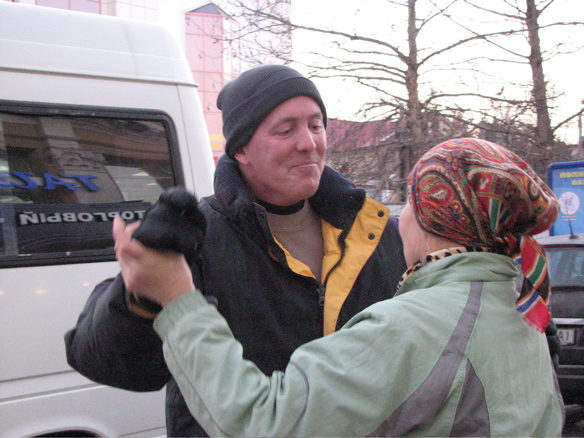 Dancing with the Babushka

The next place we made it to, the one with the English menus, was fresh out of English menus and, as the waitress told Anya, was in the process of turning itself into a beer joint with not much in the way of food. But Anya persisted and the waitress agreed that they could cook us some chicken and beef platters, and we had a fine meal, with a generous amount of rolls, mashed potatoes, a salad for Andrew, etc. It was quite good. 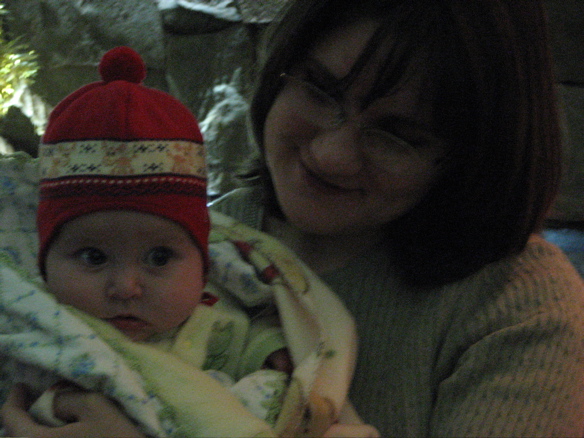 By the time we left the restaurant, it was dark outside. It’s a strange thing to go to church and after-church lunch, and to walk out of the restaurant into the dark of night. Of course, our church didn’t start until 1:00pm, and we didn’t find a restaurant until 4:00pm, and were two hours there. And we’re in a place where the sun sets at 4:30 every afternoon in the winter.

We made our way back to the cars, and Jason and Anya dropped us off at Virgil and Loys’ apartment. We spent another cozy night eating popcorn and watching movies (The Incredibles and Narnia tonight). It was another good day.

Today we are heading back to Yalta to ring in the New Year.