This is a good story of someone discovering what really matters: Why Jake Locker Walked Away From Football

With a nudge from his mentor, Locker started to explore his relationship with Jesus. Hasselbeck could sense Locker’s angst over his hero status, and he told the rookie that trusting in Jesus could help him cope. Locker still drank at that point, but not as heavily as in college. Alcohol wasn’t his problem; it was a symptom of his problem, how he masked his problem.

Hasselbeck invited Locker—who had attended Catholic services growing up but who didn’t yet consider himself religious—to team chapel. Eventually the two men came to play a game that Hasselbeck called the Daily Bread, in which they competed to compliment at least one person each day. Later that first winter, after Locker appeared in five games, Titans players were packing up for the offseason when Hasselbeck invited Jake to fly to Orlando with him for a Pro Athletes Outreach conference—“just a weekend retreat looking at God’s design for your life,” Hasselbeck explains.

Locker had no preconceptions as he listened at one symposium to hip-hop artist Lecrae, but instantly the QB felt connected to this rapper who grew up surrounded by drugs and gang violence. After becoming successful, Lecrae explained, the pressure to “keep it real” overwhelmed him, until finally he chose to end the double life. He’d prioritize Jesus and his family above all else. The internal conflicts that Lecrae described seemed to mirror Locker’s inner turbulence.

Lauren had joined him on the trip, and she was pregnant with Colbie. Their life appeared to be perfect—millions in the bank, daughter on the way—but that’s not how Locker felt. “I was pretending with everybody,” he says, “because I wasn’t authentic with anybody.” (Says Lecrae of the notion that his Orlando talk in any way led to Locker’s retirement: “I hope his fans aren’t mad at me.”)

As the conference wound down, Jake and Lauren decided to be baptized, and with Hasselbeck standing in the water beside them, they dedicated their lives to Jesus. That moment, Locker says, is why “I can sit here today and say that I’m an extremely happy man.” It marked the first day of Locker’s new life—and the first time he asked himself, Do I want to play football anymore?

I have to include this as well, from earlier in the article:

He talks for most of the next two hours, answering every question. And yet when he departs that afternoon with a bro hug, he says he’s still not sure he wants to fully cooperate. I worry that he might have just bared his soul to an audience of one. If he’s to participate in any story, he says, he wants Jesus to be the main character.

Found this gem tonight on Ligonier:

It has often been remarked that Paul clearly implied that he spent three years being taught by Jesus Himself (Galatians 1:12), either directly or (perhaps more likely) through the study of the Word. Thus, like the other apostles, Paul studied with Christ for three years before beginning his ministry (compare Acts 1:21).

I had never noticed that before!

Does anyone else miss Margaret Thatcher?

Do you use Moleskineâ„¢ notebooks? They’ve become somewhat of a fad in my immediate family. Me, my wife, and our eldest two walk around with our moleskines like we’re in some kind of secret society or something (it would be a society of people who blow money on really, really expensive notebooks).

Anyway, I found this site tonight: ‘skine art. It’s devoted to people who can do more with a notebook than just scratch illegible notes in it1. Some samples below.

Disclaimer: This is an art site so I can’t vouch that every picture scribbled therein is for family consumption.

Update: It appears the site has barriers in place against linking to its images, so I’ve removed the images below (which had blanked out anyway). You can check the site out here.

I cannot even explain how geeked out I am over this!

The historic Apollo 11 mission launched on this day forty years ago. You can follow the mission in real time (minus exactly forty years). They are orbiting the earth right now. Trans-lunar injection in about 89 minutes.

I’ve got the audio on so I can listen to the back and forth between Mission Control and the crew.

My daughter, Bethany, is in her freshman year of high school. Also attending her school is a young actor named Tony Oller, who stars in the Disney short series “As the Bell Rings”. Throughout this first semester Bethany got to know Tony a bit (they say hi in the halls, are MySpace friends, etc)

Today we got a fun surprise. Bethany was a bit shy about telling us this, but it turns out that awhile ago she sent a picture of herself and Tony to PopStar!â„¢ magazine as part of a contest.

And, wouldn’t you know it – if you know Beth, this is no surprise, actually 🙂 – here she is, right on page 32 (I scanned this in tonight). 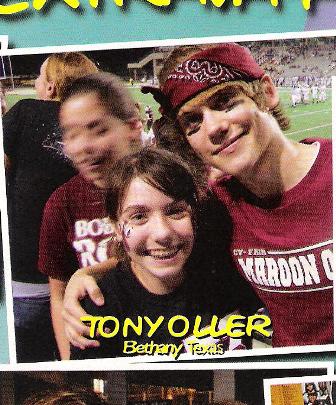 And here’s the magazine cover. 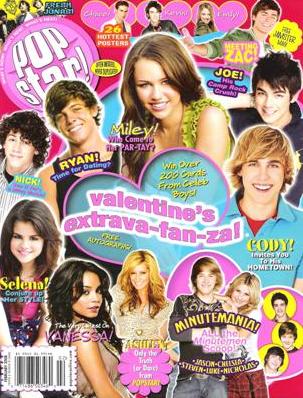