Who: Three sleep-deprived men. Yours truly, my son Andrew, and his friend Kenny

Our Objective: Experience the battlefields of the Civil War in the Western theater (primarily Tennessee). Almost exactly ten years ago, Andrew and I had toured the battlefields in the Eastern theater; Gettysburg, Antietam, Bull Run. Our goals this time include Shiloh, Chickamauga, Lookout Mountain, Stones’ River, Vicksburg.

Our Day 1 destination: Oxford Mississippi, to visit Faulkner’s house, and then on to Tennessee.

We started out before 6:00am. None of us had much sleep the night before, Andrew and Kenny having arrived around 2:00am that morning, and me having had a whirlwind day of getting ready for the trip and a fitful night of sleep that started around 11:30pm.

We piled our bags into our rented Nissan Altima. And it is at this point in my narrative that I must digress:

I rented the car the previous day. Jill drove me to the airport and we picked the car up around 3:30pm. Upon driving out of the lot, I noticed that the transmission appeared stuck; it was not shifting out of first. This struck me as odd, since the car only had about 3,000 miles on it. So now to get it back to the rental lot and raise a fuss.

But how to get back to the rental lot? You see, in the time it took me to realize that the car wasn’t shifting, I was already on the highway that leads toward the airport, because I took a wrong turn. Jill, undoubtedly rolling her eyes at seeing this oft-repeated circumstance, patiently waited for me to figure out which way was what, and after about ten minutes I was finally back at the rental place.

I pulled in. Shut the car off (in disgust!), stepped out of it and notified the attendant that the transmission on this car must be shot. He gave me a strange look, but, wronged as I was, I paid him no mind and marched over to the rental desk and announced that I needed a new car because the one they had rented to me was no good. They too gave me a quizzical look, asked for my paperwork, and then, as I was checking out which car I now wanted, with Jill texting me that I should demand an upgrade, they promptly lost my paperwork. After scrambling around for several minutes, they found it again. The lady behind the counter had accidentally handed it to one of the attendants who was using it as a scratch pad to scribble notes.

This was all too much. I was swiftly approaching high dudgeon when the original attendant to whom I had dropped the car off drove up . . . in the car. Here’s how the conversation went.

Attendant: I don’t think there’s anything wrong with this car.

Me (smiling patronizingly): well, you’ve only driven it in this lot. You need to take it out and get it up to speed and then you’ll see that the transmission isn’t working.

Attendant: I did. This transmission works fine.

Me (speaking as to a young, wayward student): Impossible. When I drove it, it was stuck in first gear.

Attendant (smiling like the mongoose before he devours the snake): That’s because you had the car shifted down to first gear.

He was nice enough not to add you idiot to the end of that. He had to show me what I did wrong: the Nissan Altima does indeed have a shifter that will lock into first gear if you push it all the way to the left, which I did.

In my defense, do people go mudding or haul trailers in their Nissan Altima?

Well, I guess some do. Chastened, and having offered apologies all around, I drove off the lot sheepishly in my perfectly operational rental car, with personal dignity much less operational.

So we started out. I drove for the first four hours until Andrew took over. My shift carried us across that invisible line between Texas and Louisiana, in which the landscape changes almost immediately from the familiar Texas landscape to the strangeness of driving on stilted highways through the enormous, shabby green sight (and smell) of Louisiana Bayou. We occupied ourselves by listening to a great audio book, Moneyball by Michael Lewis. Fascinating, funny, and I’ll never watch a baseball game the same way again.

We stopped for lunch and ate some strange tasting (or strangely tasteless) chicken at a KFC somewhere in Mississippi, and then continued on. Our immediate goal was Oxford, Mississippi, and we needed to get there before 4:00pm, because that’s when Faulkner’s house, Rowan Oak, closed for the day. We got to Oxford, around 3:20, and, following some poorly worded advice from the Google map printout, promptly turned the wrong way. We discovered the error of our ways about five miles later, called the Rowan Oak number, got ourselves some better advice, turned around, and again asked directions from a yellow-jacketed security person when we hit the University of Mississippi. Turns out we had overshot again. We turned around, got to the right street, and finally made it to Rowan Oak with about twenty minutes to spare.

William Faulkner lived at Rowan Oak from the early thirties until his death in 1962. I haven’t read any Faulkner, but Andrew is a big fan, and I guess it’s time I picked up something by this author. My understanding is that he is one of the great American authors, one of those mid 20th century southern writers who wrote in a rather dark vein. 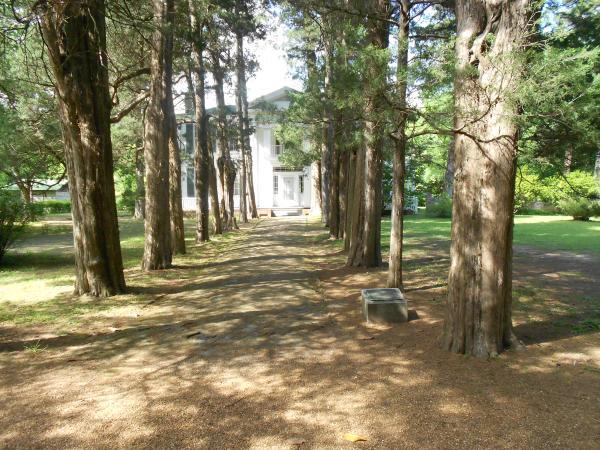 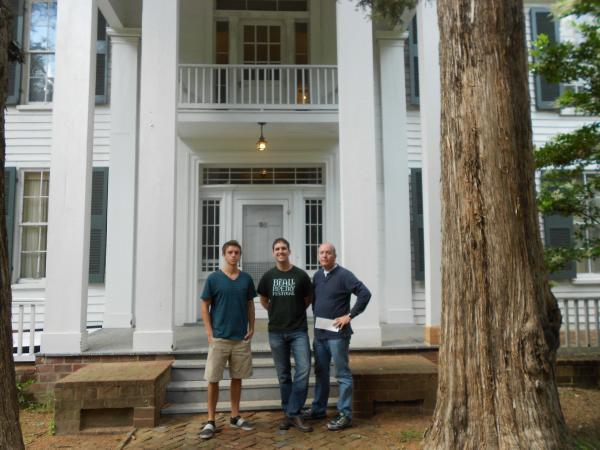 Kenny, Andrew and me 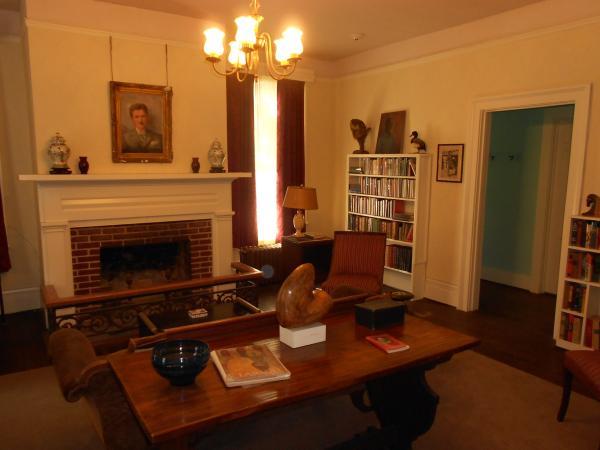 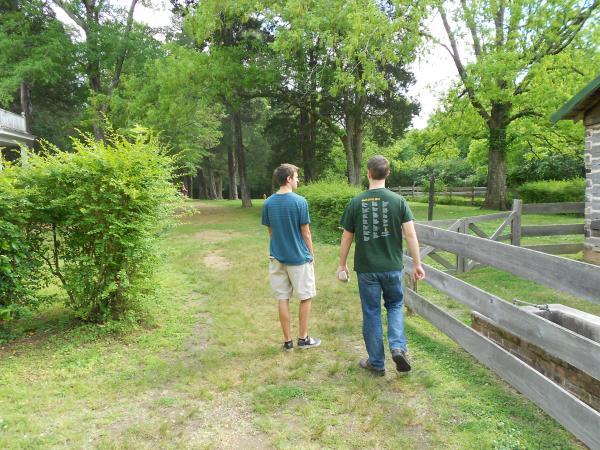 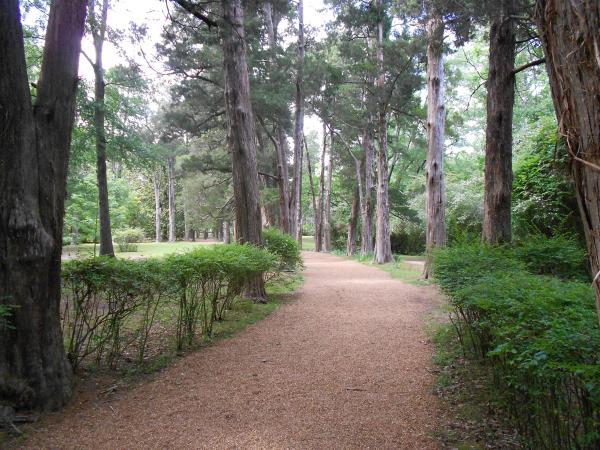 There are some great trees on this property 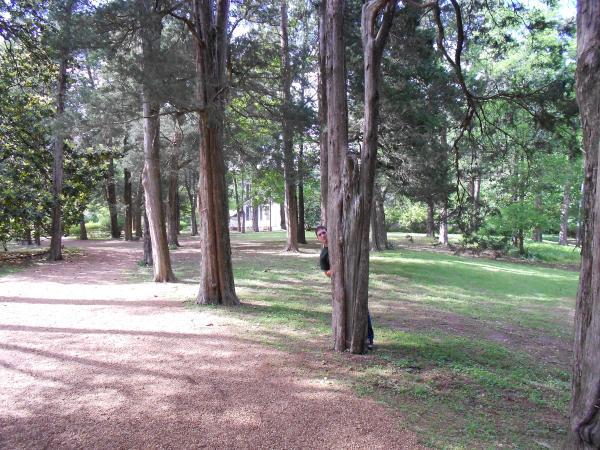 The visit to Rowan Oak was worth it. A good stop.

At this point, Kenny took over driving and took us the two hours to Counce, Tennessee, which is twenty minutes or so away from the Shiloh battlefield. We checked into our hotel, then grabbed a bite at a local eatery called The Ribcage, which has good food and gave us our first experience with Tennessee accents; for instance, the waitress asked us after the meal if we wanted some “paa” (Key Lime Pie).

Back to the hotel to rest up for an early start tomorrow.

One thought on “Battlefield Tour – Day 1: Setting out and Rowan Oak”