Yesterday (Saturday, 12/29) was quite a day! I’m still amazed at how much we’ve been able to do here in Ukraine in just a short time.

Loys and Virgil hired two drivers, Rafat and Adir, to take us on a trip to Yalta. It was a nice drive through the mountains and the falling snow made for some pretty scenery. Yalta is about an hour and a half from Simferopol, and half of us rode in Adir’s car while the other half rode in Rafat’s car. Neither man speaks English. They are both, by the way, capital fellows and they handled the three-sheets-to-the-wind Ukrainian traffic with calm and expertise.

In a somewhat (I say “somewhat” 🙂 humorous example of culture shock, the car that Andrew, Molly, Bethany and Nata were riding in (Rafat’s car) was tuned to a Ukrainian station that plays some American music. Evidently one of 50 Cent’s spicier raps (or, as Andrew put it, the most filthy thing he’d ever heard on the radio) got some airplay as they drove down. Rafat, of course, doesn’t understand the language and so was not tuned in to the subject matter.

We arrived at Livadia palace, which is the site of the famous Yalta conference that took place in February of 1945. This was a conference between Churchill, Roosevelt and Stalin which had to do with, among other things, getting Russian help in the war in the Pacific and deciding how to partition Germany after the war. 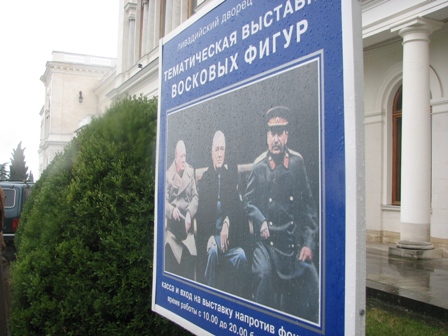 It was interesting to be standing on such a historical site, and to be able to see the negotiating table where these agreements were hammered out. 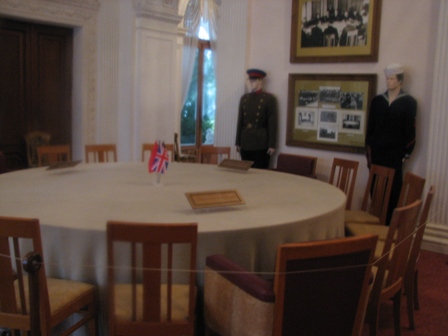 Also, as we’ve gotten more comfortable with Cyrillic, we worked on sounding out the transliterated names on the plates. The picture below shows Winston Churchill’s nameplate, and the rough phonetic transliteration of the Cyrillic is as follows: “Ooeenston Chercheell”. 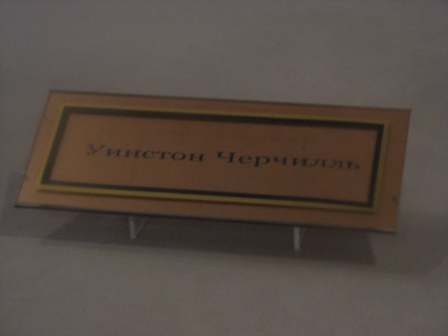 The palace was beautiful but also a little sad. It had originally been built by Tsar Nicholas II, the last Tsar of Russia. Pictures of him and his family were everywhere. They were all executed by the Bolsheviks in the revolution of 1917. 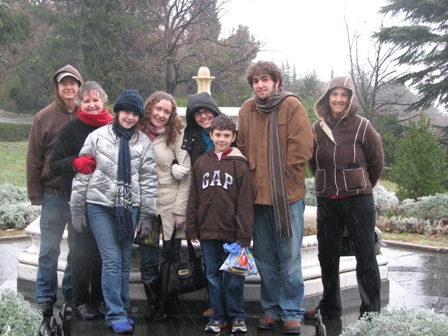 Outside Livadia Palace, by the fountain

After visiting Livadia, we set our course for that great destroyer of world cultures, McDonalds. Yes, they have one in Yalta. For an American, it is an interesting experience to be served at a Russian-speaking McDonalds. But Nata translated well for us, and the girl behind the counter (Natalia) did a good job filling the order.

The menu was, of course, in Ukrainian Cyrillic (which differs slightly from Russian Cyrillic but is pretty close). I’ve gotten in the habit these past few days of reading as many Cyrillic words as possible, because it’s common to find a word I understand – all languages share certain words, of course. But the McDonalds menu in Yalta was so amusing, because it is a straight transliteration of all the main McDonalds food items. For instance: 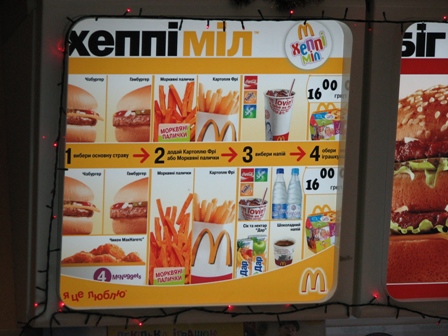 We also saw menu entries for other familiar items, such as the Ð‘iÐ³ Mak (can you guess what that is? 🙂 and, the item I finally ordered: The Big Tasty! 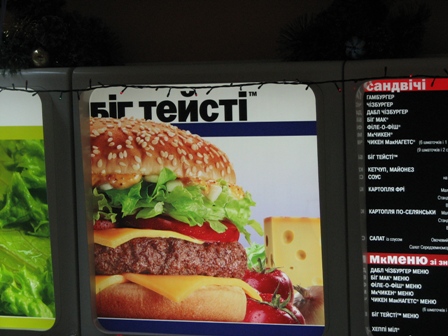 It was big and, yeah, pretty tasty.

I mis-ordered Blake’s ice cream cone, using Nata as our translator (I think I just confused her so we ended up getting an ice cream cup with chocolate syrup). So we sent Bethany back up to try again, after getting some instruction from Nata, and she ordered a “Marojna Rajok” (ice cream cone). Of course, this being Bethany, she got it done perfectly.

The McDonalds is built on a harbor looking out on the Black Sea; it’s a really nice view. The McDonalds is also a stone’s throw from a huge statue of Lenin. Talk about a physical reminder of the great worldview clash of the 20th century! 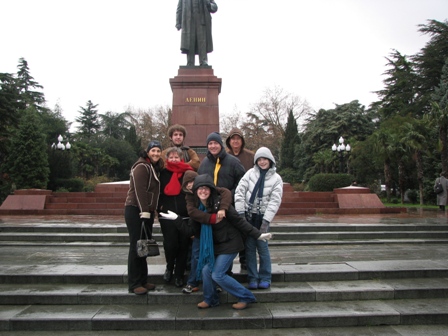 Group in front of Lenin’s statue

Following this, we drove up into the mountains to visit a beautiful Eastern Orthodox church near Foros that was built on a peak back in 1892. It is a working church, but also a tourist attraction. We passed several people who appeared to have walked all the way up the mountain to visit the church. One such lady walked in, crossed herself, and kissed a picture of Jesus in the center of the church, then went to pray along the walls where there are candles lit to saints. The church is very ornate and small, with no pulpit or chairs; Nata explained that on Sunday the attenders kneel (I believe – kneel or sit) in a circle and the priest will bless them with incense or water.

We made our way to the back of the church which had a magnificent view of the mountains. I have to admit that we got a little carried away. Rafat, one of our drivers, came to the backyard of the church and began hurling snowballs at us. So . . . yes, I admit it . . .

We had a snowball fight in the backyard of one of the stateliest and most formal churches in Eastern Europe.

We headed back to Simferopol after this for pizza and movies in Loys’ and Virgil’s apartment. Laptops are wonderful things for watching DVDs (especially when you have a computer projector! Well done, Virgil!)

It was a great day. 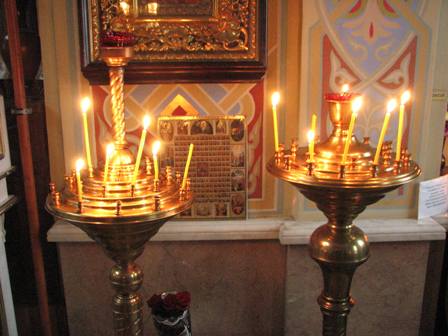 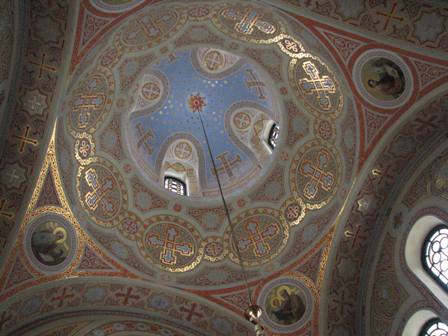 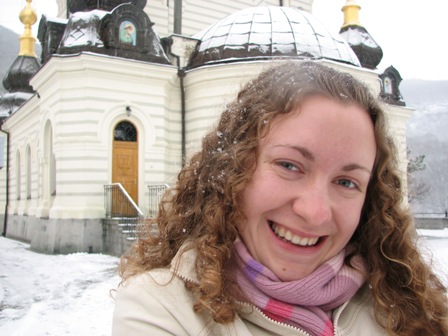 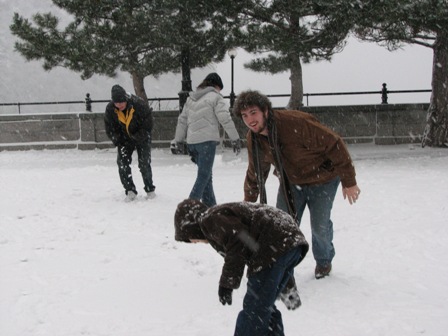