“I will whistle for them and gather them in, for I have redeemed them, and they shall be as many as they were before.
Zechariah 10:8 ESV

And the glory of the last garden
From its bejeweled walls
To the majesty of its tiniest leaf vein
Is brighter, deeper, more profound and poignant
Than it would have been
Without the serpent

So to gather
All of his
Without one of them lost

Without one of them lost

And in the end
The serpent
Got nothing at all

I was tired yesterday evening when I walked onto the Lone Star College University Park campus. It was time for our weekly Core meeting (the Core is the Christian club I help lead at LSC UP). I was lugging my backpack and a carry-case of thirty Chick Fil A sandwiches that Lone Star generously provided fo us. They are good to us.

It didn’t matter that I was tired. When i walked into the building i had the same energizing feeling that I get every week: deep affection for this great little community college campus and gratefulness and wonder that I get to do this.

Here is a picture of the group last night. They devoured the sandwiches, by the way. I’m blessed a million ways. 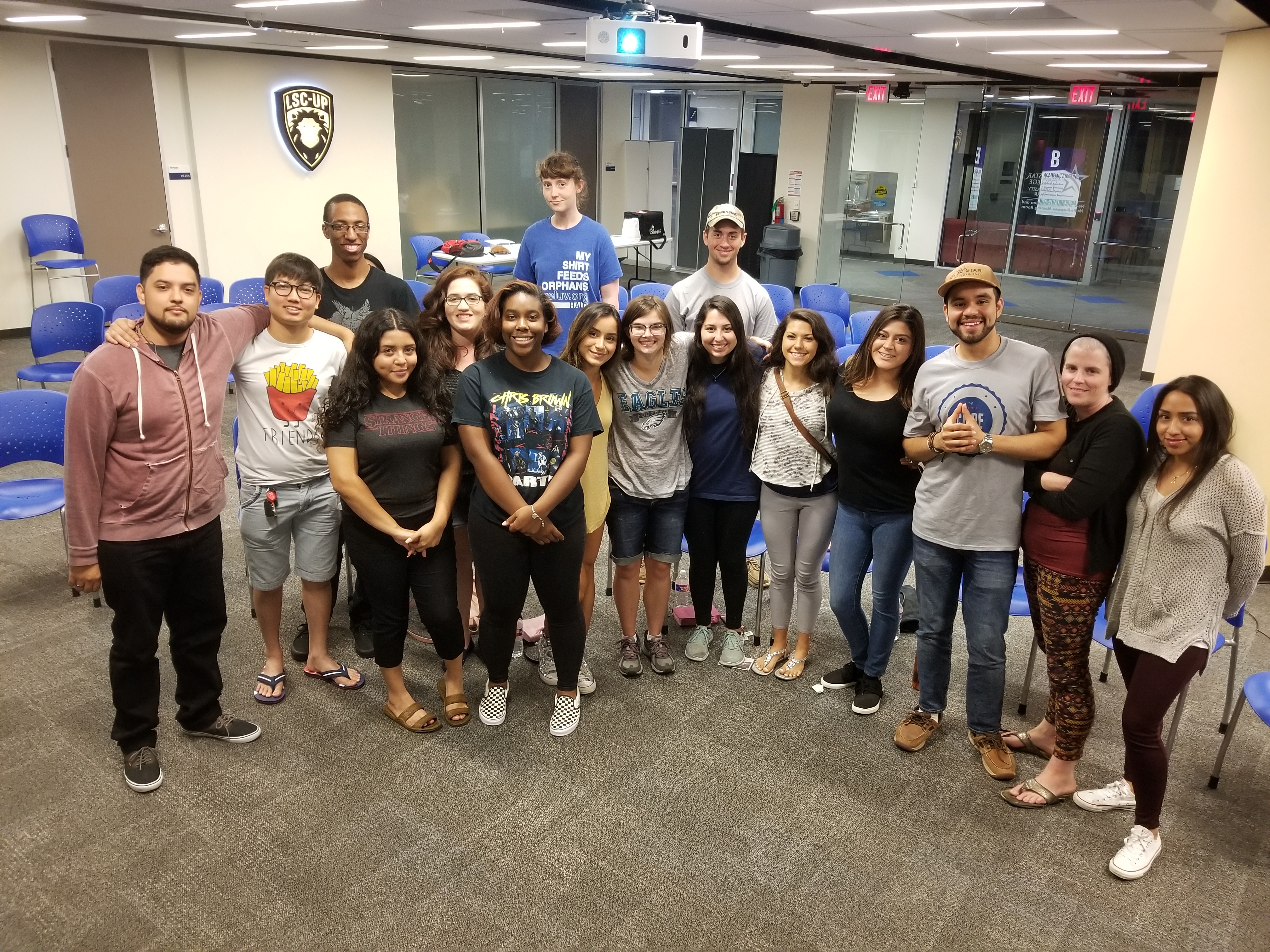 I haven’t posted recently because I  haven’t been on the bus for awhile. I spent last week in California at a data conference. Jill came with me; it was an enjoyable week and we even got some vacation time on Friday in San Francisco.

While there we visited the prison at Alcatraz. That was fascinating. Alcatraz housed the worst of the worst. As far as is known, in its 29 year history no one ever survived an escape attempt from Alcatraz. Even if you were able to get out of the facility, Alcatraz is an island a mile and a half off the coast of California and it is believed no one would survive the tides and hypothermia of the swim. But people still tried.

Fight or flight? When to escape from your circumstances and when to dig in and push through? I think about this a lot when I’m in difficult times, but I almost always pick “fight” over “flight”. I believe persevering through results in a better man in the end. Push through.

God has given me a lot of escapes in the midst of all that fighting and pushing. Home is an escape. Jill is an escape; home is where she is. My kids and grand kids are an escape.

I use the word “escape” the way J.R.R. Tolkien used it when responding to criticisms that the Lord of the Rings was “escapist.” He agreed that it was, in he same way that escaping from prison is “escapist”.

One thing I love about Jesus is that he didn’t escape when he could have. He persevered through the most horrible trial imaginable on the cross. He escaped death, not by avoiding it, but by literally submitting to it and then breaking out of a stone cold prison and walking forth in resurrection power.

In the same way, he didn’t die and rise so that we could escape this world. He is redeeming this world and building his Kingdom and one day he will set this world all to rights again. We won’t be escaping, we will be coming home to the garden for which we were created.

And night will be no more. They will need no light of lamp or sun, for the Lord God will be their light, and they will reign forever and ever. – Revelation 22:5 ESV

Don’t be afraid, God’s Spirit hasn’t departed. He has shaken and is shaking the heavens, the earth, the lands, the seas, the nations. All will fall before an unshakable Kingdom whose Sovereign rode into the town of the Temple, veiled power in humility, seated on a donkey. He shook the temple, small and close, in cleansing, righteous rage.

The Lord owns the treasures of the earth, and the cattle on a thousand hills. His Temple will be filled with glory as those he treasures come forth from every nation, drawn by the Advent, the Incarnation, the Atonement delivered on the day the earth shook, the Veil tore and the Blood flowed. Drawn by the Resurrection that fulcrumed the center of all history as a tomb door shook open, exploding the seals as hell shook apart

Out of the shaken ground, in an upper room tongue-lashed in bright flame, the true unshaken Temple stood as the wind shook the shutters and the tongues reeled back the Babel curse, the un-scattering together of a shaken-apart people.

Now in divine diaspora dispersed among billions of Spirit tabernacles world-wide, walking the earth in community unshaken by distance, in veiled glory, from glory to glory, as we await the final shaking when our beautiful King returns, and the shaking is fulfilled, and garden peace reigns once again.

I lost it yesterday.

Two things set me off. One was Donald Trump’s moral equivalence and open admiration for Kim Jong Un. The other was the SBC allowing Mike Pence to turn the convention into a Trump rally.

Unfortunately, I allowed these two newsbits to turn me into a person I don’t want to be. I said some things I shouldn’t have to people who deserve better.

I’ll be glad when the painful work of sanctification is complete.

We live in a surreal time.

We just got through a G7 summit where our President treated our long-time allies like garbage; impugned their motives, hurled public charges of dishonesty, whiplashed through acceptance of the joint statement and follow up rejection of same.

We just got through a summit with North Korea where our President treated the murderous dictator of NK with profound respect and expressions of mutual trust.

Reactions to this have been brightly demarcated along tribal lines, in precise mirror-image to how the reactions would line up for the previous administration.

The four dimensional chess is getting exhausting.

And we are witnesses of all that he did both in the country of the Jews and in Jerusalem. They put him to death by hanging him on a tree, but God raised him on the third day and made him to appear, not to all the people but to us who had been chosen by God as witnesses, who ate and drank with him after he rose from the dead. And he commanded us to preach to the people and to testify that he is the one appointed by God to be judge of the living and the dead.
Acts 10:39‭-‬42 ESV

This is part of the talk Peter gave to the household and friends of Cornelius on the day that is often referred to as the “Gentile Pentecost”. I’m drawn to his statement that God made Jesus “to appear, not to all the people but to us who had been chosen by God as witnesses, who ate and drank with him after he rose from the dead.”

There is a lot in that sentence, but in particular Peter answers a question many have asked over the millennia. You may have asked it yourself. Here’s the question:

“God, why don’t you just show yourself?”

Why didn’t he appear to all the people? Wouldn’t that be easier? Jesus could have just flashed across the sky and the whole world would see and know. Why didn’t God do that? Why doesn’t God do that?

I can’t comprehensively answer that question. But I think Peter gives the main answer here: because God didn’t want to.

Jesus didn’t appear to all the people, as we might desire. Instead, he appeared “to us who had been chosen by God as witnesses.”

The whole point was to have us carry the message, imperfect and bungling though we might be. This is how God has chosen to do it, virally spreading the good news of Jesus to the world through people who, first, were the friends and followers who ate and drank with him, then through those they told, down through the centuries and untold spiritual generations to us.

I read Matthew 6 yesterday. It’s cliche to say it, but sometimes you can read something you’ve read a bunch of times and suddenly see it differently; see a deeper theme you never pieced together before.

I saw the pattern, maybe for the first time. Jesus talks repeatedly about the motives we have for nearly everything “spiritual” we do (giving, praying, fasting) and what those motives should be. There’s that curious section around verse 22 referring to the good, healthy eye flooding us with light versus the bad eye flooding us with darkness. There’s the majestic ending full of encouragement and admonition against anxiety.

See the Kingdom clearly, have a “good eye”, and be flooded with light.

Invest in the Kingdom. Store your treasures there. Have faith, God will take care of you.

It’s so simple. It really is; simple yet so hard. It battles against those treasures on earth that scatter our vision: praise from others, caressing and feeding our worries, chasing the gold at the end of the rainbow. Earthly financial security. Work, work, work. The American Dream.

Jesus is calling us to the Kingdom Dream.

May I dream Kingdom dreams.

I made the mistake of getting back on Twitter this week. Big mistake.

So I’m getting back off of it. It’s too addicting and too troubling.

Some wisdom I have undertaken to understand over the past five years, though I haven’t lived it as well as I would like, is this: simplicity is good. God speaks to us in simple things.

I have repeatedly seen a vision of what my life could be like.  It includes much, much less time before a screen. Breathing the open air. De-cluttering. Reading scripture in a physical Bible far more than I do. Paying in cash. Making good use of my time. Resting more. Living in the real world and not the meta-world.

It’s all right there. Just need to start living it.

A quick rant. Well, maybe not a rant. More like a line of thought that is spoken very loudly and quickly and often in my mind.

It is a mystery to me. Maybe I’ll never understand.

If any one  can explain this to me, I’m all ears.